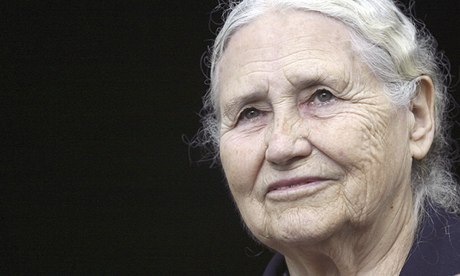 On the 29th November, with my partner, Alison Soskice, I was one of the many who attended the last rites of that darling writer, DORIS LESSING. The ceremony was held on the outskirts of London, conducted by a woman of the British Humanist Association. So no religion there, then. placemats”
I sat most of the time with Tom Mashler, once the head of Jonathan Cape and publisher of both Doris and me. Doris wrote five volumes in her Canopus in Argos series, in which the turbulence of this world is continued into the universe. One of those novels, “The Making of the Representative for Planet 8”, was made into an opera by the renowned Philip Glass.

The rarified higher strata of Brit-Lit regretted Doris’s excursions into SF, and spoke against them; ‘slumming’, they probably whispered, behind their velvet cuffs. At the other end of the scale, sky-fi buffs resented the intrusion of a famous mainline writer into what they regarded as their property.

Well, Doris kept on writing – as a real writer must do – and conjured about fifty volumes into being. She was kindness itself, and many folk she had helped over the years raised a glass to her as her coffin moved slowly away from our faulty world.

We climbed back into our cars and did not speak.