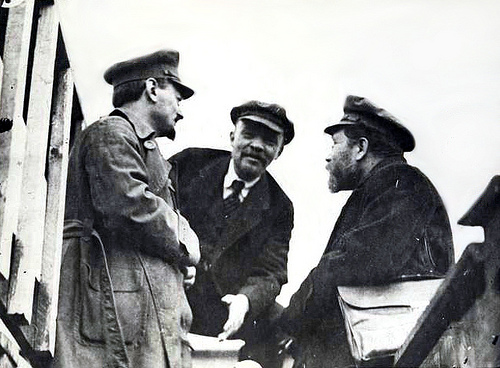 This is the third instalment of short stories from Brian’s month long attempt at writinga  short story a day for the month of September 2012. Enjoy

Somewhere in an old dusty book written by a young woman, I came across a line of poetry which runs in English as follows: ‘In the village of Shushensk, beneath the mountains of Sayansk…’ Nothing more.
This line was written deep in the great wilderness of Russia, far from the calculated uglinesses of the great cities such as Moscow and Novosibirsk. It is the first line of a poem attempted but never written. The author was Vladimir Lenin, and Shushensk was the little place where he married a woman called Krupskaya; it is said that Krupskaya died a virgin in 1924. The young writer in her dusty book gives some details.

Lenin was a driven man. He had been arrested and exiled for opposing the rule of the Tzar. It was presumably during that exile that he came to the quiet village of Shushensk, where there were confining customs regarding what food one ate, and outside toilets.

In that peaceful backward place, the young Lenin swam and fished, so we are told, and met the woman who became his wife. There he wrote his one line of poetry. There he must have fumbled with the prospect of a poem, perhaps a grand poem. In any case, the prospect defeated him. If one writes a first line of a poem, more generally follows.
The curfew tolls the knell of parting day.
The lowing herd winds slowly o’er the lea…’
And many lines in this, Thomas Gray’s poem, do indeed follow. But not so with this brief line of Lenin’s. It is a start and end of something. And surely it tells us something…
Had Lenin no poetry in his soul? Possibly not – since, if the rumour is true, he never wished for the joy of sexual communion with his wife.
Here in Shushensk, our brave young author tells us – for she has actually been there – we can breathe air flavoured by the breath of pine trees and gaze upon distant snow-capped mountains. All is peaceful.
And she, by name Susan Richards, asks on her printed page the question we too are forced to ask: ’Supposing Lenin
2
had succunbed to the beauty of this place, how different might Russia’s fate have been?

As we perceive, beauty – the beauty of a poem, the beauty of a remote countryside – and what of his wife’s beauty? – had no hold on Vladimir Lenin. He was instead determined to change the world.

Changing the world… Surely this must almost invariably mean destroying many tolerable or insignificant ways of life, breaking many hearts and families, killing thousands of people?
We may well hope to see lives in our complex world improved; but the best we can do to that end is to live our lives humanely, generously, circumspectly. Not to turn a great nation into a prison, a hell-hole such as the gallant Solzenitsyn was forced to visit, and has described.
The Tzar was overthrown in 1917, towards the end of the Great War. It can be read about, to name a convenient account, in Boris Pasternak’s novel, “Dr Zhivago”.
Lenin, in the year 1922, became the premier of what had ceased to be Russia and was now the Soviet Union – or more accurately the Russian Socialist Federative Soviet Republic…
It was this same Lenin, this non-poet, his name recognised throughout the world, who brought about an imprisoning power, shackling society. Every strip of land belonged to the workers. It remained a dark secret as to who the workers belonged.

Lenin died of a stroke in 1924. The Communist state he helped to create faded only in 1991; nowadays, it seems to be at a convalescent stage, seeming to look more readily to China, that mighty state to the East (which seemed at one time to catch its neighbour’s disease) than to the West.
China has a long, astonishing record, a treasury in all the arts. Russia is certainly not without art; yet it emerges often with a struggle, or so it appears. It is not impossible to see, amid the cobwebs of the past, lying on the floor of Russia’s unfortunate history, a neglected virgin wife and a scrap of an unwritten poem…