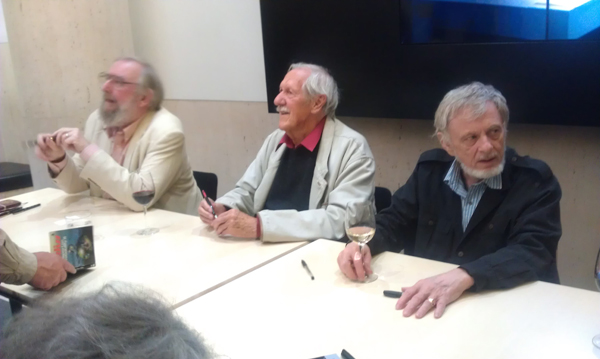 What an enjoyable evening at The British Library watching Dad (Brian Aldiss), Michael Morcock, Norman Spinrad and John Clute talking about Science Fictions’ apparent heyday, and the so called New Wave Aldiss, Morcock and Spinrad belonged to back then.

Roz Kaveney did a great job of chairing the evening, and opened by asking Aldiss about TS Elliott and James Joyce. Elliott was Aldiss’s boss when he worked at the Times Literary Supplement. Allegedly Elliott never read Aldiss, but CS Lewis did.

Morcock opened with comment on Science Fiction being the base for creating a more popular literary culture in the 60s. He founded New Worlds as the platform for this. Talk was to eventually get round to whether or not New Worlds might one day reappear in digital format, but there wasn’t even a hint of it this evening. Interestingly there were hints of both Aldiss’s and Spinrad’s entire collections being digitised.

Aldiss’s Report on Probabbility A was first published in New Worlds as it didn’t find a publisher. It got spotted there and then published by Faber. For Morcock New Worlds was the ultimate anarchic platform for authors – do what you will and it will be published. The New Wave (as it was coined by New Worlds) was all about collegial relationships and deliberately set about to be genreless. These days SF is very pigeon-holed and it’s only John Sladec and a couple of other US authors who are trying to break these barriers down and challenge perception. 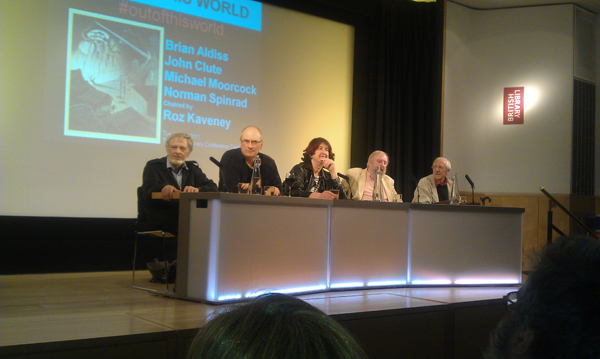 For the New Wave authors it was not a case of plotting the downfall of ‘the old science fiction’. Everyone agreed with the ethos of using SF as a platform for good prose to some extent. The movement was all about getting it published, and of course being degenerates!

Spinrad believes that the 60s used to be dominated by UK Science Fiction. Now it’s France, Russia and further afield.

Aldiss believes a lot of SF for him comes from within. He wrote Greybeard at a miserable time in his life when he was alone after his ex-wife had taken his children from him. The idea of a childless world developed into a plot line. He joked that there must be a lot of miserable people out there to demand Greybeard now be republished as a Penguin Classic 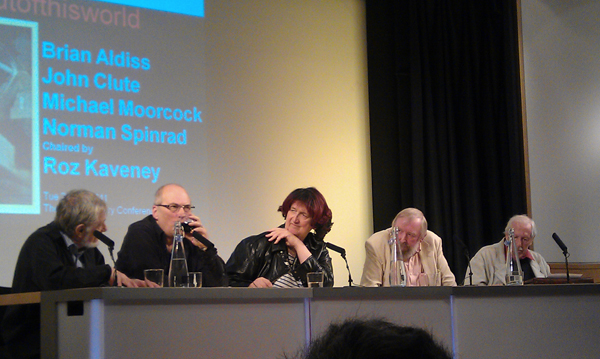 It was apparently Hungarian Hugo Gernsback who coined the term science fiction in Amazing Stories. At the start he called it ‘scientifiction‘, but the fans ripped it apart.

Aldiss stated that Gullivers Travels & Robinson Crusoe, both written in the 1800’s, effectively fit the genre of Science Fiction. He joked that when the US published Hothouse they had to call it Long Afternoon On Earth or it would end up being placed into the gardening section of book stores.

Moorcock then jokes that writing SF was professional suicide back in the 60’s. When asked whether anyone had written about this golden era – the New Wave – Morcock stated Colin Greenland‘s Entropy Exhibition

The panel were asked for their recommended reads:

, Report on Probability A – Brian Aldiss

Favourites of their own:

… He Walked Among Us 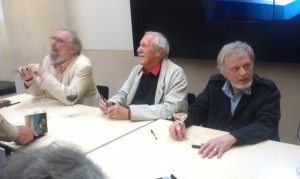 Another write up on Bloomsbury Bytes.

Watch out for digital collections from both Aldiss and Spinrad, and Aldiss’s new science fiction novel Finches of Mars.

Just wanted to stop by and say: Happy Birthday Brian! I love your work!

John Clute has written one other novel, 'The Disinheriting Party', but it's out of print and very hard to get hold of.

I enjoyed it enormously. My own memories of the event are here: http://www.flickr.com/photos/jvk/5857335159/in/photostream